THE BEST DOG BITE I EVER HAD 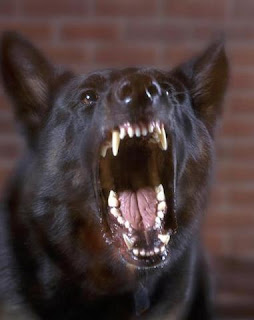 The first was the worst. I was about six or seven years old when I crossed H Street in Blaine, Washington, and turned left to walk down the alley. There on the right a large, black, German Shepherd was chained by the back porch of a large house. He ran at me, roaring with deep barks, until he got to the end of his chain and was jerked to a stop. I noticed before he did that the chain had broken off the collar and fell to the ground. The beast inched forward more, then more, and soon realized he was free. Meanwhile I took off running, but didn’t get thirty feet before I felt a horrible pain in the calf of my leg. My falling and screaming satisfied the dog enough to make him stop the attack, and I limped home crying. The animal’s fangs had made several deep punctures, and I remember my Dad saying to someone, “It’s a wonder it didn’t take a chunk out of his leg.” I never went down that alley again, and to this day I distrust black German Shepherds.

Since then I’ve had two newspaper routes--one in Sedro Woolley and one in Sultan--during which I’ve been bitten by dogs seven times. I tried my best to make friends with all the dogs on my route, and one example of this is when I was riding my bicycle down 1st Street in Sultan. A large dog ran out and chased me, soon catching up to me and running alongside. No big deal, I would just set my feet up on the bar of the bike so the dog couldn’t bite my ankle. But I underestimated her size, and it was a simple matter for her to leap a bit and bite my thigh. I panicked with the pain and lost control of the bike and crashed on the pavement, scaring the dog away. I slowly got to my feet and picked up the bike, and looked over to see the dog in her yard, cringing with shame. I rolled my bike off the street and sat down on the curb and called the dog. With her head lowered, she humbly came up to me, and I sat there for some time petting the animal and talking to her. I thought surely she was ashamed of having bitten me, and that with all the talking and petting she would be my friend from now on. But when I took my hand away and began to get up, she snapped at me, and I realized this creature was psychotic. Strangely enough, though, she never did chase me again.

The angriest I ever got from a dog bite was when I brought a newspaper to a woman standing on her front porch, and was bitten by her dog just below the buttocks as I walked away. It hurt badly and I reeled around and told her that her dog bit me, but she wouldn’t believe me! “Oh, he doesn’t bite,” said she. I wasn’t about to pull down my pants to prove it to her, so just stomped away, not as mad at the dog as I was at the stupid owner.

But all the dog bites I suffered were made up for when I was riding my bike through Sultan and came upon a dog fight. Two fairly large dogs were battling it out, surrounded at a distance by seemingly everyone in the neighborhood. The dogs’ owners were frantic, the children screaming and crying, and some woman was shouting, “Get the hose! Get the hose!” Meanwhile the dogs were trying to kill each other. I knew one of them--a spaniel on my route, a nice dog, white with brown spots, and she loved me. I didn’t know the other one. I didn’t wait for anyone to get a hose. I rode up on my bike, laid it down, and walked right up to the fighting dogs. After positioning myself, I grabbed both collars at the same time and pulled the dogs apart, holding them at arms’ length. Both dogs were barking furiously at each other, and the nice dog who loved me lunged forward and managed to yank loose from my grip. She sprung at her opponent, but her lower fang caught the inside of my thigh instead. It hurt terribly but with all the people watching I pretended it didn’t happen at all, and I grabbed her collar again and held the dogs apart and called out, “Come and get your dogs!” Men ran up and took their dogs by the collars and dragged them away. Everyone stood staring with mouths open as I calmly got back on my bike and rode away, a hero. I pedaled around the corner, out of the people’s sight, then jumped off my bike and danced around in agony. There was blood on my pants. At home I found that the fang had punctured deeply into my thigh; there was a big gaping hole full of blood; and it hurt for a long time. Now, forty-five years later, I still have the scar. And when I look at it, I remember the time when I was a neighborhood hero, when a nice dog, accidentally and secretly, gave me the best dog bite I ever had.