INDIANS IN A SMALL WORLD 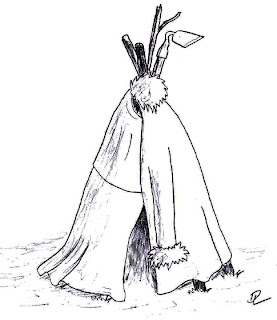 As far as I knew, only white people lived in my hometown of Blaine, Washington, in the late 1950’s. People of other races were stationed at the Blaine Air Force Base, and would come into town and/or attend our church, but only white kids went to Blaine Elementary School, where I went. And when I heard that "Indian" boys started going there, I was excited!

Wolten & Montforts was a large store in downtown Blaine, and Mr. & Mrs. Wolten, who owned a large house on the corner of 3rd and Clark, had adopted six Native American children. One day I went into the boys' lavatory at school and saw Bill, the oldest of the children, at one of the sinks. Usually-shy-aloof-unsociable-me was so impressed by a real Indian that I walked up to Bill and asked, "Would you be my friend?"

Bill glanced over at me, hesitated, then said, "I guess so." And he meant it. From then on we were fast friends. I admired and was fascinated by this guy--a genuine Indian!--and followed him around as his true friend.

One day I was playing in the Woltens’ yard with Bill and his year-younger brother Richard, and thought to my ignorant self, 'Hey, these are real Indians. They must know how to make a tipi.' And so I asked them if they would show me how to make a tipi. They must have gotten a big kick out of this silly, preacher's kid, but they never made me feel silly. As a matter of fact, the two of them went right to demonstrating to me how to make a tipi. They gathered together some makeshift poles and coverings, and put some awkward thing together that they could call a tipi. It wasn't like in the movies, but I was okay with it. It solidified my love of tipis, and perhaps this is why you find a tipi in the chorus of the Butter Rum Cartoon song.

Mick Blakely was a bully in the elementary school. One day our class was in the school gym, and someone from behind tapped me on the shoulder. I figured it was just another regular kid, and was going to show off by whirling around and swinging my fist over his head. Well, it was Mick, and he was tall, and to my horror I accidentally socked him right on the side of his head. Of course a chase began, across the gym and down the hall, until Mick caught up with me, knocked me down, and pounded me.

Well, Bill Wolten was also bigger than I, and tough, and my good friend, and I asked him after that if he would be willing to be my bodyguard against such bullies as Mick. Bill agreed, and I was delighted finally to be safe! Days later, again in the gym, Mick came over to pick on me. Bill saw it and came over. He said a few words to Mick, taking a hold of Mick's chin with his fingers to intimidate him while he spoke. I was amazed by my hero. But then a tragedy happened. Mick didn't back down...and they fought...and Mick won...and Bill cried. It was like the world fell out from under me, but I can't imagine how badly Bill must have felt. I lost my security, but he lost a lot of his pride. At least Mick was content with beating Bill and so left me and some of my other friends alone. But it was then our turn to try to give Bill some support.

Bill died in 1978. His brother Richard died in January of this year, 2011. Just recently I became Facebook friends with Berwyn Bough. She also lived in Blaine around that time, and remembers my Dad being the Methodist minister there. Hence, our friendship. Well, two days ago, I discovered to my utter amazement that Berwyn is Bill and Richard’s younger sister! In Blaine we lived only a couple blocks from each other. And now, half a century later, Berwyn happens also to live in Missouri, only 35 miles from us!

You know, after this, I don’t think I would be surprised if someone rings our doorbell, and I open the door to find Mick Blakely standing there ready to beat me up.  Come to think of it, years before asking Bill, I should have gone up to Mick Blakely in school and asked, "Would you be my friend?"  Then Mick would have learned how to build a tipi, too.  And we could have all gathered inside it to smoke a peace pipe!

I located Mick Blakely in an online search and sent him a letter in July of 2016, including the above story and ended the letter with: Will you be my friend?  A week later he replied by email, including: "I do remember your story. Sorry about the bully attitude in grade school. I didn't realize. Thinking back it seems like we did become friends. I remember going over to your house, the parsonage next to the Methodist Church."

I can believe that we did indeed become friends, because how else could I remember he lived in a house across the tracks south of town with a weeping willow tree in the yard, unless I had visited him? Mick has since served four years in the Air Force, then returned to Blaine to stay, has been married 40 years, and he and his wife play and sing Gospel Bluegrass Music and have a small farm and horses. The last words of his reply are: "Yes I'll be your friend."