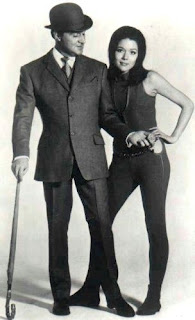 The Avengers, John Steed and his partner Emma Peel, two unique British detectives/crimefighters, had to deal with highly unusual criminals, some approaching science fiction, and of course this was cool. But what intrigued me most was how cool Emma Peel almost always was in dealing with them. She often dressed in a tight leather body suit, was beautiful, used martial arts, and not only kept her composure while confronting lethal threats, but would joke in the face of the killer. She was modern and drove a sports car, while her partner John Steed was old-fashioned, wore a derby, fought with an umbrella, and drove a vintage Bentley. There was no real romance between them (he called her "Mrs. Peel"), they lived apart, but there were subtleties that sometimes made us wonder. John Steed (Patrick Macnee) was always there, but over the series' seasons his partner changed. Emma Peel, played by Diana Rigg, was the most popular, and my favorite, and I have every one of her episodes on DVD. The show was popular in the Sixties, but our children enjoy it now about as much as we enjoyed it then.

______
To see the complete contents of the Butter Rum Cartoon, click here.