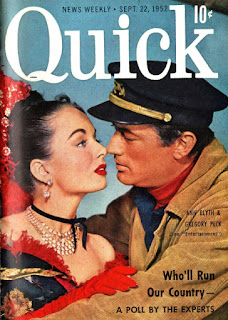 One of my favorite TV shows is Mister Peepers, which ran from 1952 to 1955, starring Wally Cox. I have the first two seasons on DVD, and at the end of one of the episodes Wally Cox announced that there was an article about him in the current issue of Quick magazine. Although born the same year Quick News Weekly began, I had never heard of it, and the way Wally said "Quick" made me want to get one and see what the magazine was like. I managed to get the issue he spoke of, via eBay, and found that the little weekly publication was so good and now so nostalgic that I ended up collecting them.

Quick News Weekly was first dated May 23, 1949 and ended with the June 1, 1953 issue. The 4-by-6-inch magazine, published in Des Moines IA by Cowles Magazines, Inc., was sold mainly near check registers at the market each week for 10¢. A total of 209 issues were published, and now I have all but 4. The 60-some pages were packed with news about Animals, Art, Book of the Week, Books, Business, Crime, Education, Entertainment, Fashion, Food, For Women Only, Good News, Health, Home Life, Labor, Magazine News, Male and Female, Movie of the Week, National News, Of-the-Week Stories, Pictures of the Week, Predictions, Quick Quiz, Quotes on the News, Religion, Science, Sports, Vital Statistics, What They're Saying, and World News. And by now even the ads are fascinating. The news was given in an unbiased way, without the garbage and disinformation we see today.

Oh, and by the way, here's what it said about Wally Cox: 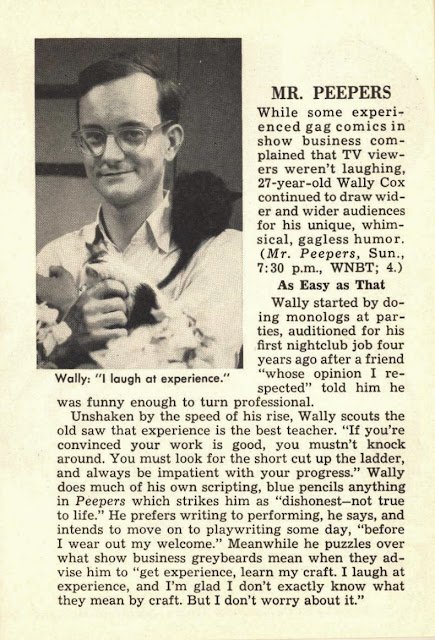