While watching my DVD collection of one of my old favorite series, "Highway Patrol," I got the idea for a new hobby: Collecting the State Police Patches of all 50 States!  They're relatively inexpensive on eBay. Once I get all fifty I can sew them onto something neat. As my wife says, "Dale is happiest when he's totally absorbed in some new doohickey."  I'm happy. 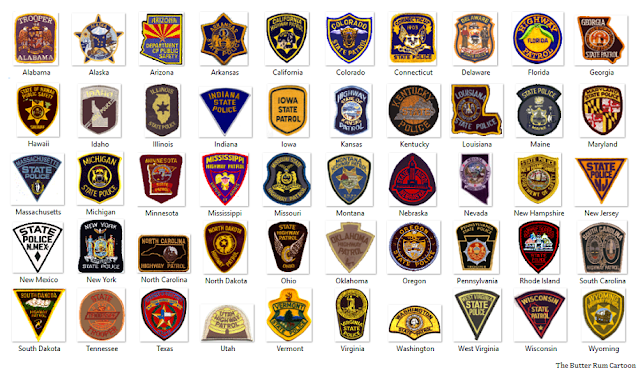 While we're on the subject, back in the early 1970's when I was going to college on the G.I. Bill, I was on my way to school in my tiny Honda sedan, in a great hurry, and between Sultan and Monroe, Washington, passed a car going around a curve. And what should be coming the opposite direction that I almost ran head-on into?  A Washington State Patrol!

I got an expensive ticket for negligent driving and was ordered by the judge to take a drivers' safety course. While in that little class with other heavy-footed criminals, the instructor warned us that our next infringement would cause our licenses to be taken away, and asked, "Who here would not be greatly inconvenienced in having their license revoked?" I raised my hand.  "Losing your driver's license would not inconvenience you?" he asked me.

Everyone laughed, including the instructor.