In the Army in 1968 we had the "Don't Ask, Don't Tell" policy regarding homosexuals. But in our platoon in basic training at Fort Lewis, Washington, there was obviously one, whom I shall call here Private Q. He would often lounge around in the barracks, sitting on his bunk in his underwear, with his Army-issue shorts gaped open and exposing much of his genitalia. It was apparent that he was watching for any sign of positive response from those of us who walked by. But the only response I noticed might be an occasional, "Close it up, Q."

Pvt. Q had the hots for the guy who slept in the bunk above him, whom I shall here call Private S. Pvt. Q was often quietly talking to him, and we never noticed Pvt. S talking back.

One evening we heard a commotion in the latrine, and about a dozen of us ran in to see what was what. There in the shower were two naked men. Pvt. S was casually standing under the running water, facing away from us, and Pvt. Q was lying on the wet floor with some blood on his face. The running water is all that could be heard. None of us made a sound, for it was easy to see what had happened. We all filed back out of the latrine in silence, minding our own business.

After that, there was a new calm, a new peace, among the whole platoon, for what had been out of whack had been put in order. The fellow with the bruised face kept his shorts closed. He was not one of the more popular G.I.'s by far, but he was not ostracized either, for he had received his dues. Pvt. S of course never got in trouble for the episode, because those in authority were never told about it.

But perhaps a third instruction should have been included in the policy: Don't Ask, Don't Tell, Don't Do. 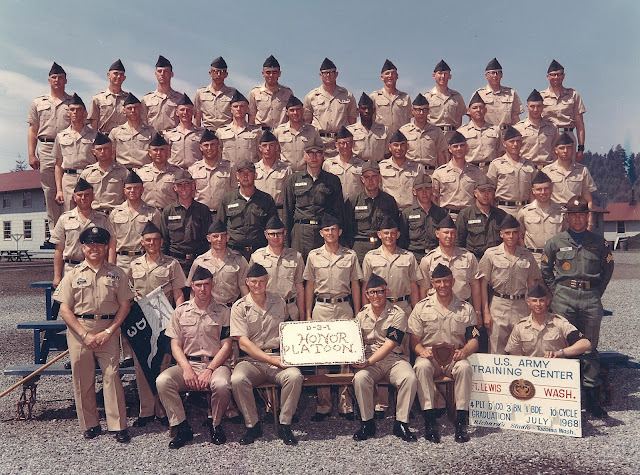 Posted by Butter Rum Cartoon at 4:39 AM