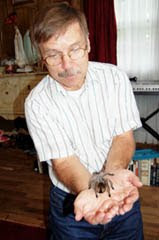 Last Wednesday, October 14, 2009, I was featured in a front-page story in the Branson Tri-Lakes News, a few days after the newspaper's society editor, Mindy Honey, visited our home. My family and I figured the article would be about my Pulitzer book reading, but that was the last and least thing we talked about. Here is the article, and I wish to thank Mindy for her skill and her accuracy, following what was more of a friendly visit than an interview. Mindy also took this photo which appeared on the front page, and another, not shown, of me with all the Pulitzer books, which appeared on the second page.

Most downtown Branson residents would probably be surprised to learn the man that delivers their mail is a published author, started the original American Tarantula Society, has hitchhiked several times across the U.S. and most recently, read a lifetime’s worth of Pulitzer Prize winning books.

Dale Lund, who has owned many tarantulas over the years, has spent the past four-and-a-half decades conquering his fear.

“The best way to get over a fear is to learn more about it,” Lund said.

“Having always been terrified of insects and spiders, this was a major step for me,” he said. “The tarantula was the big daddy of all such critters and had frequented my nightmares.”

He received the spider from his freshman high school biology teacher.

It took Lund about two years before he ever got up enough nerve to hold it.

“Excited about simply getting one, I knew nothing about caring for it,” he said.

He began corresponding with an entomologist at the American Museum of Natural History and began to realize that tarantulas are “grossly misunderstood creatures.”

It was in college that Lund wrote “Tarantulas as Pets” for a creative writing class. At the urging of his instructor, he pursued having the article published.

It took several tries and expanding his article by five times, but by 1977 “All About Tarantulas” was published. Lund received $400 for his efforts.

At the time, Lund said there was only one other book about tarantulas and it was a children’s book.

After his book hit the streets, people began asking Lund more and more questions, so he started a newsletter in which the questions could be published and answered by the pool of readers.

“I was a teller at Seattle-First National Bank in Bellingham, Wash., then, and of course, everyone thought I was crazy,” he said.

“Nevertheless, in 1978 the American Tarantula Society was founded in the bank’s breakroom, and the publication of our bi-monthly newsletter Tarantula Times began.”

Membership grew slowly at first, until a local newspaper reporter found out about his club. The article was published nationwide.

“Next came ‘People’ magazine, which after a telephone interview, published a full-page article, with photos in the Feb. 5, 1979, issue,” he said.

“Playboy” magazine soon picked up the information and Lund found himself giving live radio interviews while trying to handle his job at the bank.

Eventually, Lund found himself so involved in the project, he was devoting two hours a day to it, while trying to handle a full-time job and family.

Lund had trouble finding someone to take over the club of 500 members and eventually the club went defunct.

Today, Lund’s family has two tarantulas and his wife and children have all become somewhat experts on the creatures.

“They move very slowly, until they want something,” his wife Micki Lund said.

“I’ve heard their bite is like a bee sting,” his 17-year-old daughter, Glory, said.

And while tarantulas are still a part of the Lund family, Dale Lund’s focus for the past six years has been reading every Pulitzer Prize winning fiction book from 1949, the year of his birth.

“I was never one for fiction books,” he said, explaining it was a strange challenge to give himself. “I preferred nonfiction.”

Lund, who described himself as a slow reader, said he wondered if his reading would ever get caught up to the present and it did this year.

Some books he liked, others he couldn’t stand.

“‘A Fable,’ by William Faulkner, that was the most miserable,” he said. “The one I dreaded the most and my favorite, ‘Lonesome Dove,’ I sailed through it.”

Together, both Dale and Micki have a list of their own interesting stories.

“We hitchhiked across the country, over 4,000 miles, when our son was 2,” Micki Lund said.

That trip ended when the tractor trailer they were riding in crashed into a vehicle stalled in the roadway.

The family had been resting in the back when the truck crashed.

“When it was done, the sleeper we had been in before the crash was so flat it was hard to pull our boots and shoes out,” Lund said. “It was busted like an egg.”

The family was so sore after that, they decided to fly the rest of the way home.

“They have done a lot of unusual things,” Glory Lund said.

The couple has now been married 34 years and has six children. Dale Lund has been delivering mail in Branson for the past 14 years.