MY EXPERIENCE AS A DRUG DEALER


On my first leave home in the Army, my small hometown of Sultan, Washington, was overtaken by thousands of hippies coming to attend the Sky River Rock Festival and Lighter Than Air Fair. After experiencing that tremendous influence, I was transferred to Sandia Air Force Base in Albuquerque, New Mexico, for training in nuclear weapons maintenance. While there, I was given the nickname “Hippie.”

It was a fancy base, with brick barracks containing two-man rooms. My roommate’s last name was Eisenhower, a quiet fellow who did his best to put up with me. I spent a lot of time at the bowling alley a couple blocks away, and one evening while there my buddies and I began beer drinking. Out of curiosity I tried to see how many beers I could drink and still maintain some sort of composure. I’m not sure if I finished the eleventh beer or not. The next thing I knew, I was throwing up over the edge of my bed into Eisenhower’s boots.

At a cool bookstore in Albuquerque I bought The Hippy’s Handbook by Ruth Bronstein--an entertaining, staple-bound book full of info, some of it false, especially in the section of legal highs found in the kitchen. It said that one can get stoned just eating so much nutmeg, and I tried it. Never, ever, try to swallow straight nutmeg! I thought I was going to gag to death. It didn’t get me high either.

I’m not sure if I got the idea from this book, or if I just played on the nickname “tea” for “marijuana,” but one boring Sunday, for something to do in my barracks room while Eisenhower was away was to take a pack of cigarettes, roll the tobacco out of each one, and replace it with Lipton tea. My door was ajar, and some passersby noticed my efforts and the word got around. Later, outside, with the pack of “tea joints” in my shirt pocket, a black guy came up to me and asked if I’d be willing to sell him the pack.

He pulled out a five dollar bill and handed it to me, looking around and trying to be discreet.

“You want to buy tea-filled cigarettes for five dollars?” I said with an incredulous smile. 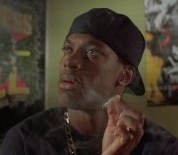 And so I sold him the pack. (By the way, five dollars was worth more then. A full ounce of real marijuana cost only ten dollars.) And the fellow strutted away, feeling rich in drugs. I was worried initially that he would be back to pound me for gypping him, but no, he wouldn’t, because I had told him nothing but the truth and was reluctant to take his money. He had insisted on gypping himself. And I never saw him again.

_____
For the complete contents of the Butter Rum Cartoon, click here.