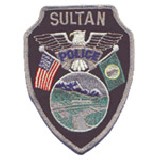 He was the only town cop in Sultan, Washington, and nobody liked him. He wore dark-rimmed glasses, and his stocky body had to stretch to cover the big ego inside. And since I was a high-schooler with a motorcycle, I was Officer Shipley's quarry.

There was no major incident -- just perpetual annoyance, on both sides. Although every time Shipley looked at me he gave the impression he'd love to arrest me, he never did.  But he did give me a ticket once. All I was doing was cruising through the little town of Sultan, population then 960, and I ran a stop sign. As I did, I glanced a block north and spotted Shipley's car. Since it was likely he saw me run the sign, and so began driving parallel to me a block away, I ran the next sign, too, in hopes of losing him. It didn't work. Even running the third sign didn't evade this cop, for apparently he was running signs along with me. We met at the garage of my Dad's parsonage. I didn't have time to ride into the garage and shut the door behind me. Shipley got out of the police car and walked up to me, and said, "What are you doing?!" I didn't think it would help to tell him I was just trying to get away from him, so accepted the hefty ticket for running three stop signs in a row.

One time I did evade Shipley. I had two friends on the back of my motorcycle. I can't remember if the helmet law was in effect then (neither of them were wearing helmets), but it was illegal to have three on a motorcycle. And there was Shipley, down the street. He saw us, and he was coming. So I maneuvered around a couple corners, then turned and smashed through an old lady's hedge, and we sat there in her backyard as Shipley rushed by trying to catch us. He didn't that time.

Then there were just the annoyances. Like when my brother Paul and I sent up a hot-air balloon one still night, made out of a plastic cleaner's bag, and heated with twenty birthday candles. There was absolutely no wind. The balloon climbed straight up from Birch Street in front of our house, and we watched it flicker like a campfire in the sky, until the candles burned down, the balsa wood cross-sticks caught on fire, and the aircraft fell in pieces, the flames burning out well above the ground. Paul and I then went into the house, and I turned around to see Shipley cruising along Birch Street. He might have been searching for the culprits who dared to have fun with a hot-air balloon, or maybe he was just passing by coincidentally. But just as he slowly drove by our house, the big plastic bag fluttered down, landing in the middle of the street right behind his car. It had almost landed on top of him.

After leaving Sultan for a few years and coming home, I felt depressed one night, and drove my car down a dirt road a couple blocks away, parking near the Sultan River.  I wasn't sure what to do with my life, things weren't going that well emotionally, and I just sat there in the car, pondering things, trying to have a little peace and quiet. Headlights. A car crept down the dirt road and stopped behind me. And here came Shipley, with his flashlight. Surely I must be a druggie with a back seat full of dead bodies. Shipley shone his bright flashlight into my eyes as I rolled down the window, and he said, "What are you doing?"

He didn't know what to do with that. I'm sure his mind reeled through possible offenses thinking might be. But, coming up with none, he shone his flashlight at all the dead bodies that weren't in my back seat, then returned to his car, and backed out up the dirt road and away. He didn't help cure my depression, but I managed to get over it eventually anyway.

After another stint away from Sultan, I came back and visited friends who excitedly told me the news. Shipley was no longer the town cop. He was found one night, parked, with a boy in his back seat whom he had molested. We never saw Shipley again. We never heard anything more about him.

_____
If you liked this post, you may also enjoy the following:
UFO over Sultan, Washington
Between a Shock and a High Place
The Sky River Rock Festival and Lighter Than Air Fair
To see the complete contents of the Butter Rum Cartoon, click here.