I SAW BILL CLINTON IN PERSON 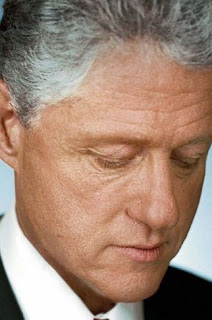 Bill Clinton, the pro-abortion Democratic candidate for President of the United States, was visiting in Seattle in 1993, and, as members of the Rachel Society, it was imperative that we greet him with protests.  So we gathered our signs and carpooled from the Everett area to downtown Seattle.

We gathered with hundreds of other pro-life people, across the street from the facility where Clinton was to meet with others for some secret doings, and waited for a long time. Finally it appeared that some action was going on inside a fenced-in area across from us at the north end of the building, and I could see Clinton's white-haired head poking above the men around him.  I tried to point him out to others, but as far as I knew, I was the only one of us who had the rare privilege of spotting this character before he entered the building.

While Clinton went about his business behind closed doors, we strolled about the sidewalk, holding up our signs, as we talked and prayed.  Across the street from us a large gathering of homosexuals formed.  I forget the name of the organization, but that's not important.  It was made up mostly of gay radicals who considered vulgarity profound, and they got quite a kick out of the fact that across the street from them were hundreds of Christians, and they took advantage of it.  They called out obscenities.  Then, not content with our focus on peaceful prayer, they proceeded to try their very worst to get some sort of reaction out of us, and began humping each other, sodomizing with clothes on.

I had seen worse in my life, but was concerned for the older women and especially children among us who may not have; and so, when a policeman walked by (of which there were many), I asked him if it was legal for such public obscenity and told him it was very offensive.  The cop, with disdain in his eyes, said, "Maybe some would think your signs are offensive."  Just my luck I had to ask a gay, pro-abortion cop.

We later got word that Clinton would most likely be leaving soon, at the building's north end, and so we moved down around the corner, across the street from the fenced in area, and we waited.  And we waited.

Hours passed, and we stood there silently on behalf of the millions of babies who had been killed "legally" in our nation of "life, liberty, and the pursuit of happiness" since the "supreme" court decision on Roe v Wade in 1973.  Since then "Jane Roe" herself has been converted and is now a pro-life activist, but the "supreme" court continues to wallow in its sordid, past mistakes. We stood there, for hours, holding our signs, legs and arms turning to rubber, then somehow gaining new strength. Among the various groups protesting, the pro-lifers were the only ones still there, on the then quiet streets, when the door of the building opened in the middle of the night.

At about 1:00 a.m., two secret service men came out and crossed the street to visually search us. They ogled professionally at each of us, and checked behind our signs. When the black-suited man walked up to me and peered behind my sign, I didn't bother to ask him why he needed dark glasses in the middle of the night, but I did ask, "What? You think a pro-lifer would hide a gun behind his sign?"

He didn't immediately respond, but as he walked away, he muttered, "We just don't want any trouble."

"If he's elected, we'll have trouble," I said, and the secret service man suddenly stopped and hesitated, then walked on. I would love to know the thoughts he entertained in that brief moment he stood there with his back to me. He was probably wondering if my statement could be considered a threat, and if he could or should arrest me. Maybe he wondered if he could get away with turning around and shooting me? I'll never know what went through his head.

After the visual search, the two agents went back into the fenced area, and moments later about forty police motorcycles suddenly started their engines together and their riders aimed the headlights at us. We all remained in that awkward position until Bill Clinton was ready to be driven out.  The gates then opened, directly across the street, and bikers came out in formation, followed by a black limousine with Clinton in the back seat.

It was then that I got a good look at Bill Clinton not twenty feet away from me. The driver turned to his left, and Clinton was sitting on the side nearest to me. We had waited most the day and half the night to be there in front of him as he came out, to demonstrate how we care for the innocent victims of his abortion policy, but all Bill Clinton did was stare at the floor of the car. He didn't even look up to see us. And I know why he didn't.

As his first executive actions after he was elected in 1993, President Clinton revoked the Gag Rule, which prohibited abortion counseling in clinics that receive federal funding to serve low-income patients. He also revoked restrictions on a woman's "legal right" to privately funded abortion services in military hospitals, restrictions on the import of RU-486, and restrictions on the award of international family planning grants (the "Mexico City Policy"). He also lifted the moratorium on federal funding for research involving fetal tissue, making abortion an even more profitable industry. (Executive Memoranda, 1/22/93)

He could do all this, but he couldn't look up at us from the floor of his car.

And now it's much worse, with the man Bill Clinton just promoted for reelection at the 2012 Democratic National Convention, Barack Obama. This post would be much too long if I listed the fights Obama has waged and is waging on behalf of abortion. As a senator, Obama voted more than once to kill babies who were born after failed abortions (a.k.a. infanticide) and to protect the doctors who killed them. And now he's even trying to eliminate the First Amendment by requiring all employer health plans to provide free contraceptives, sterilizations and abortion-inducing drugs, regardless of any moral or religious objections -- in other words, attacking the Freedom of Religion. Heavy fines will be imposed on those who would follow their conscience and not comply. 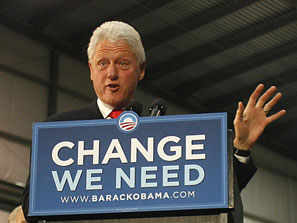 So it's gone from Bill Clinton's conscience not allowing him to look up from the floor of his car at the faces of people who remind him of his grievous sin, to Barack Obama, who wants to force us to disobey our conscience, even if he has to destroy the Bill of Rights to do it.

Yes, I saw Bill Clinton in person. But he didn't see me. And I know Barack Obama wouldn't see me either. I'm waiting for the President who would look me in the eyes with a smile and a clear conscience, and with the hope of the free generations yet to be born and welcomed in these united States of America.