THE JOY OF SMUGGLING 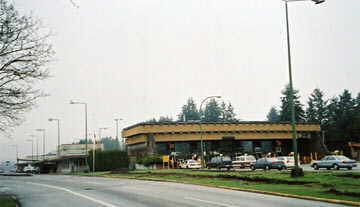 John and Donna Eaton were Mormon friends of mine when I attended Everett Community College in the early 1970's. John was my swimming instructor there, and one of the funniest things I remember in my life was when John said to the class, "Okay, now do what I do," then misstepped and fell accidentally and awkwardly into the pool.

One of the times they visited me in my apartment, they mentioned that they had never been in Canada! This was nuts. We lived 85 miles from Canada, and they had never crossed the border!  So I had to fix that problem, and talked them into the trip. I didn't have a car at the time, but they did, so off we went, with me in the back seat.

John was clean-cut and the two of them looked very conservative, but since I had long hair and was in the back seat, I wondered if we might have trouble at the border. The border patrol might suspect us of making a drug run. Although I did, John and Donna didn't partake of street drugs. But when we came to the Canadian border, the customs agents were extremely nice, asked us a few basic questions, then let us drive on. And we spent a great day in a foreign country.

But coming back into our own country was miserable! The customs agent was mean and distrustful. After a battery of questions, the agent had us get out of the car. He made a quick search of the car, but I noticed he never opened the glove compartment. He then had Donna spill all the contents of her purse out onto the car's hood. Donna was upset, and I was furious. I had wanted to have the experience of visiting Canada be a totally happy day for them, and our own country was humiliating us, especially Donna. I was ashamed of the U.S. customs' behavior.

So after we finally got back into the car and were allowed to proceed, as John pulled away from the customs agent, with car windows open and in the hearing of the agent, I said loud enough for the man to overhear me, "Whew! I'm glad he didn't look into the glove compartment." What a joy to see the expression on the man's face as we drove away.