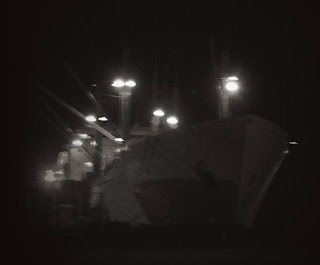 My wife Micki has always been comfortable in emotional, "charismatic" worship, but not me. My first experience with it began with a trio who visited Sultan while I was a senior in high school, called the Disciples Three. They were so talented in their contemporary music and in speaking to young people, that they were welcomed into several area churches and even held an assembly at the high school, back when it was legal to be Christian in public school. Many were converted. When they came to our church to sing for and speak to our MYF (Methodist Youth Fellowship) group, I was carried away by my first experience with the blending of Christianity with contemporary youth culture in the latter Sixties. What really struck me was when, after a sort of small-scale, personal "altar call” in which I responded positively, one of the Disciples Three looked at us and said, "Welcome home."

All my resentment towards seemingly enforced Christianity and my often overbearing parents completely disappeared, and I had a conversion experience. I ran home, Bible in hand, and hugged Mom, crying my eyes out. Dad came in the house and saw us, and joined in the hug, saying, "This is the happiest day of my life."

After that, the Disciplines Three were my heroes, and they stuck around town awhile. I was among a few privileged high-schoolers who even crammed into their car with them to go places. I began attending most every Christian activity I came across in Sultan. I heard of a healing meeting taking place one evening at a more charismatic church a few blocks away, and my favorite of the Disciples Three was to be there. I joined perhaps thirty others in sitting on folding chairs and listening to a visiting preacher with the gift of healing. After his talk, several went up to him to be healed of various ailments. The shocker was when a local lady, confined to a wheelchair for years and known by us all to be crippled, rolled up to him for healing, and after his praying over her, she actually stood! She got up from her wheelchair and stood there on her two legs, and all of us were utterly amazed.

From there, things seemed to get weirder. Suddenly a lady behind me began reeling off what sounded like Scripture, but she was talking so fast I couldn't understand her. Seeing my confused look, the person beside me whispered, "She's prophesying." As the meeting seemed to be coming to an end, the healer had us all bow our heads and close our eyes as he led us in prayer. Then he said, "With all heads bowed and eyes closed, those of you who have accepted Jesus Christ as your personal Savior, raise your hand." I was still a bit shy in responding to these various calls, but I thought, Well, no one can see with their eyes closed anyway, and I held up my hand. Then, after the prayer, the healer said, "All right, all those who raised their hand, come and join us in a circle."

I thought this maneuver was kind of underhanded, but went and joined the circle of hand-raisers. We then all held hands and some began babbling long and incoherent sentences. I had heard of "speaking in tongues," but this was my first contact with it, and it was a little frightening. I looked around and saw that most in the circle were joining in the confusion of noises, although some of it did indeed sound Arabic. Even my Disciples Three hero was reeling off something. Well, I thought, I have become a Christian, and certainly have faith. Maybe if I were just to try, to open my mouth and let it out, I could speak in tongues. So I opened my mouth and let out a few make-believe words that made no sense. And just as I was telling myself that I'm not making any sense, both people on each side of me, knowing that the Methodist preacher's kid surely was new to speaking in tongues, looked at me with beaming smiles and exclaimed, "You're doing it!"

Not making any sense was doing it.

As soon as I could, I slipped away from the gathering and out the door. Behind me I could still hear the senseless noise emanating from the building, but somehow I felt much closer to God out on the sidewalk in the cool of the night. This was the first time I remember immensely enjoying a night walk.

Later we found out that when the crippled woman we all knew stood up, she was in terrible pain but emotionally energized enough to try. It was the last time she was to stand. And afterwards, she began blaming God for her disability and, not long after, died a bitter woman.

About sixteen years later, while working at home in Everett full-time, putting the entire Old Testament into an 850-word vocabulary for Christian Literature International, I could create my own schedule. I found that it worked best for me to go to bed at 3 a.m. and get up at 11 a.m. And after sitting for hours at the moody, bug-filled, Tandy computer, I would go for a walk, usually after midnight.

I loved these walks in the city in the night. Streets were empty. Businesses were closed. It was remarkably quiet for a city of 60,000 people. I could walk in the cool, fresh air, naturally purified by the salt of Puget Sound, and let my mind wander in peace.

One of my favorite places to go was the waterfront. I walked on the docks where huge freighters were moored. Most were Japanese and had come for logs. The waterfront, too, was asleep, except for a watchman on each freighter. I would walk along the side of one of these huge ships from the other side of the Pacific Ocean, an ocean half the size of Earth, and spot the Japanese watchman who had already spotted me. I would wave at him, and he would wave back. We couldn’t speak each other’s language, but we acknowledged each other, here in the night--two souls still awake. When I’d finally return home to our basement apartment, I felt as though I had traveled many miles instead of a few blocks.

One night I decided to walk away from the waterfront instead of toward it. I walked two blocks to Colby Avenue, Everett’s main downtown street, and gazed south through the empty, quiet heart of the city. On the way back, I was passing the large, two-story house of the Davis family, good friends of ours, and heard banging in their enclosed back porch. I stopped and listened. Don and Jeanne and the kids were away, I had thought, and yet there was noise in the back porch. “Don?” I called out, and the banging stopped. After a wait, the noise started again, and along with the second bang was the sound of breaking glass! Someone was breaking into Don and Jeanne’s house! I walked away quietly, and when I was out of sight, took off running for home, two blocks away. Micki was awake and heard me hurry and call 911. I told the dispatcher that there was a burglary in progress and the address, and she told me to meet the police there.

So I began walking back to the Davis house. A block from it, I watched a police car pull up quickly to another house and the cop got out, gun in hand. “It’s down there,” I told him, “right corner but wrong block,” and he jumped back in the car to go to the right place.

And the same time I arrived at Don and Jeanne’s house, eight police cars arrived, all at once, and from all directions. As I was walking beside the house, I heard a man’s voice shout out, “FREEZE!” And I froze. But then I saw the source of the loud voice: A policeman was in the back alley with his gun resting on the Davis’ fence, aiming through the pickets into the backyard. And there, standing in the middle of the backyard, was the burglar, and at his feet was a pile of things he had taken out of Don and Jeanne’s house, mainly tools.

While they were arresting the fellow, I was sitting in a police car, writing out my report of the incident. And I watched as a cop with a bullhorn called out toward the house, “We know you’re in there! We have you surrounded! Come out with your hands up!” Really, there was no one else involved in the crime, and this was a precaution. “We’re sending in the dog!” the cop announced, “Come out now with your hands up!” No one came out, but, true to his word, they sent in the dog. A large German Shepherd entered the back door and searched the entire house alone. At times I could see his shadow at various places downstairs and upstairs. Finally he came out, and the police knew for sure that no one else was inside. Someone then secured the back door, and we all left the scene.

The next day, when the Davis family returned home, I was there, and I told them about the robbery attempt and the arrest and all. Their young daughter, Mary, watched me with horrified eyes as I talked. Then she asked quietly, her voice shivering, “Did he go in my room?”

I saw that this was traumatizing to her, and that she’d have trouble sleeping after this, and so I said, “A police dog went in your room! A beautiful and very smart German Shepherd! They sent him in and he searched your whole house and made sure no one was inside. It was really neat!” As I talked, the fear in her eyes was replaced with excitement, and she almost smiled.  Jeanne Davis called me her hero afterwards and the next day brought me a delicious apple "hero pie."

Some time later, I received the following memo in the mail: 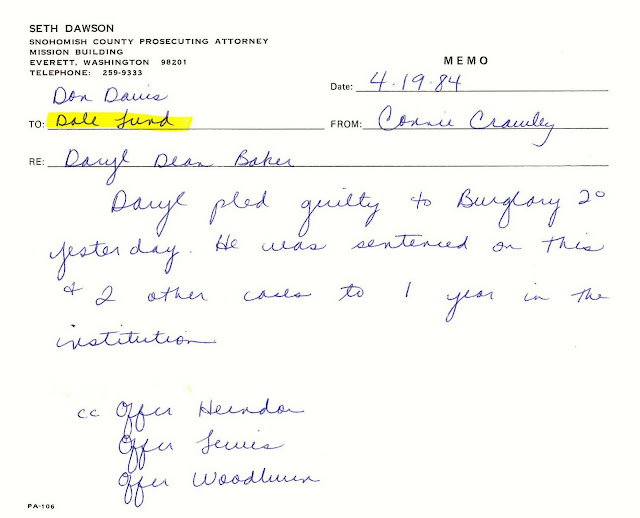